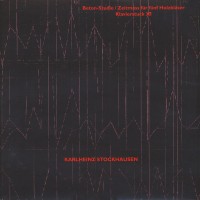 A collection of some of Karlheinz Stockhausen's earliest work, including his earliest piece of musique concrete "Beton/Studie" *aka "Étude"( written by Stockhausen in 1952/53 at Pierre Schaeffer's studio at the RTF in Paris. Until 1992 this piece was believed to have been lost. The LP also includes the celebrated "Zeitmass" *1955(, and "Klavierstück XI, parts I/IV" *1956(, both of which helped to cement Stockhausen's role as one of the leading German composers of the 20th century.

Various
Speech After The Removal Of The Larynx