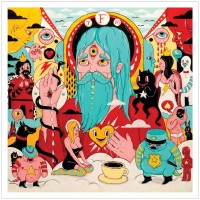 Though Josh Tillman had already released records under his own name and as part of Fleet Foxes, Fear Fun was the first under his alter ego Father John Misty. The change of name heralded a more mischievous and fun side to his personality which until then had been mired in sad singer-songwriter territory. The result is a joyous and varied album which subtly pays tribute to Tillman's heroes such as Harry Nilsson and Arthur Russell placing their innovations in a new and soon to be commercially successful territory.