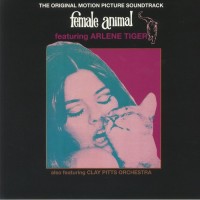 New York-based Arlene Farber, who later had a bit part in The French Connection, was renamed Arlene Tiger by future husband, Jerry Gross, for the lurid Female Animal, one of the exploitat ion films he directed and distributed in the late 60s and early 70s (here under the alias Juan Carlo Grinella). With a debauched plot about the raunchy misfortunes that befell an attractive peasant girl (with Gross appearing as a pimp), the film benefitted from a lush soundtrack by the Clay Pitts Orchestra, written and conducted by the enigmatic Pitts himself (the alias of US composer Derek Ware). This easy listening LP is a true stunner of the genre, a must-have for all fans of lounge music, as well as original exploitation soundtracks.