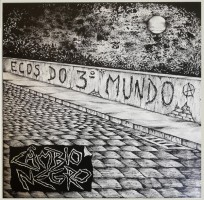 Câmbio Negro, is a seminal Hardcore Punk band from Recife- Brasil, formed in 1983 they were one of the first bands playingthat kind of music on the North East of the country and the first on that region to release an album. 'Ecos do 3° Mundo' was previously released as a demo tape in 1989, and is considered by many their best stuff, brutal, raw, energetic Hardcore.

Amebix
No Gods No Masters