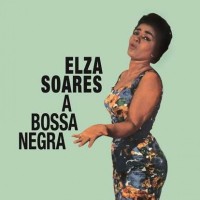 One of the most shocking but ultimately uplifting stories of Brazilian music> Soares grew up in extreme poverty in a favela, at 13 was forced to marry a man who raped her, gave birth to three stillborn children, but still fought her way to the top of the industry, married Garrincha, lost him to booze & loose women, in addition to their son and her mother in car accidents. And is still going strong! This is probably her best album and indeed is absolutely lovely, grooves like nothing else. She sings with passion ^ fire in her lungs like the fabulously versatile singing magician she is. Her husky voice became her trademark. After finishing A Bossa Negra, her second album, Elza went to Chile to represent Brazil in the 1962 Football World Cup, where she met with Louis Armstrong personally.