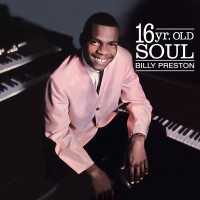 Most listeners only became aware of Billy Preston as a solo artist after he signed to Apple Records in the late 1960s. But he'd been recording for a long time prior to that, dating back to when he was a teenager. This instrumental album for Sam Cooke's SAR label (issued on its sister Derby imprint) was cut in March 1963, when Preston was still going to high school in Los Angeles. The very fact that it's wholly instrumental indicates that it's pretty early in Preston's evolution, and though he does play some piano, it's really on the more uptempo, organ-dominated tunes where he hits the best groove. In truth, these aren't any great shakes even when it comes to soul organ instrumentals, but they have a nice swinging bounce that places them a cut above period background music, though they fall a good ways short of being spellbinding. The slower numbers (including covers of hits by Sam Cooke and Ray Charles) verge on easy listening. In contrast, the more urgent cuts are cookin', with bop, jazz, and gospel influences spicing up the soul & R&B recipe.

Various
Blues With A Rhythm Vol.1