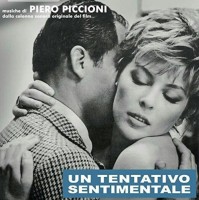 "Un Tentativo Sentimentale" is the first film by the novelist Pasquale Festa Campanile, written and directed together with Massimo Franciosa in 1963. The film fits into the path traced by Michelangelo Antonioni with his "trilogy of incommunicability" in the early years of the decade, staging a bourgeois existential drama shot between the Roman districts of Parioli and Vigna Clara and the beach of Sabaudia. The original soundtrack is one of the most beautiful and particular among those composed in the 60s by Maestro Piero Piccioni, who works on rarefied and melancholy jazz atmospheres dominated by his piano and the trumpet of the immense Nunzio Rotondo, main soloists flanked by other giants of the Italian jazz scee such as Franco Chiari (vibraphone), Marcello Boschi (alto sax), Ivan Vandor (tenor sax) and Berto Pisano (double bass).