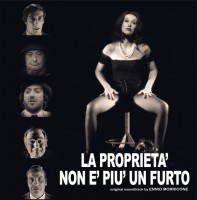 Another fine example of the Maestro's skills, breathtaking orchestration for Elio Petri's final part of the neurosis trilogy which began with ndagine Su Un Cittadino Al Di Sopra Di Ogni Sospetto' and was followed by a Classe Operaia Va in Paradiso'. Total, a young bank cashier, has been wondering for some time if his life, with its grey, dismal prospect, is worth living. He is aware of the illicit careers and rise to riches of many of his clients. He decide to start a new life> new clothes, new cars, new women. His @new look@ begins discreetly, a few small robberies in supermarkets, progressing to more important fraud. Another fantastic Morricone soundtrack back in print on vinyl for the first time since its original release in 1973.