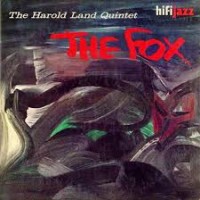 Harold Land, one of the greatest West Coast tenor saxophone voices of all time. A strong player rooted in Bop language, famous for his role in the legendary Max Roach and Clifford Brown quintet and later as part of another great Los Angeles based combo such as bassist's Curtis Counce group. The Fox is a 1960 album originally released on the Hifijazz label and reissued by Contemporary in 1969. Here Land is at the head of a marvelous quintet, some sort of who-s who of the LA jazz scene, Dupree Bolton - trumpet, Elmo Hope - piano, Herbie Lewis - bass, and Frank Butler - drums. Besides the well known instrumental skills of these musicians, the album displays four superior compositions by the great pianist Elmo Hope and two Land's originals. Music that combines a deep feeling for the Blues and a highly sophisticated West Coast sound approach.This is high-quality hard bop, easily recommended to fans of straight-ahead jazz.