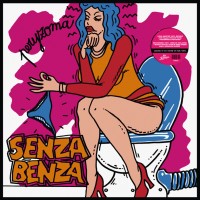 The sensational Italian pop-punk quartet Senzabenza will forever be associated with The Ramones, having opened for them on every Italian tour undertaken by the legendary New York group during the 1990s, the Italians eventually placing Joey Ramone in their producer's chair. Formed in 1989 in Latina, a small town that lies a short distance southeast of Rome, the group termed their music "Flower Punk," indicating a sound somewhere between their Ramones obsession and the non-thrash tempos of surf rock, along with peripheral links to theItalian variant of the 'beat' music of the mid-60s, as well as hints of ska and the excesses of acid rock. As with many underground acts of the era, a demo sparked the initial interest that brought them onto the newly formed McGuffin label for debut set Peryzoma, with front man Nando Ferdinandi joined by guitarist Sebi Filigi, bassist Fabio Furlan, and drummer Max Bergo. One of the lost treasures of Euro Pop Punk, it was about time that their groundbreaking debut LP 'Peryzoma' would get the deluxe-reissue treatment.

Blitzkrieg (uk)
Lest We Forget