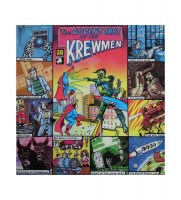 British rockabilly combo The Krewmen had several distinct phases during the 1980s, beginning in 1982 as a rockabilly trio, they moved in a blues direction for their first 45s and after temporarily disbanding, reformed as a psychobilly quartet for this sought/after debut LP. Songs like "Night Of The Living Dead," "Wild Dogs Of Zorberon" and "Hell Train" have a delicious B/movie aesthetic and "Don't Give A Toss" and "Guy Fawkes" are keen Brit takes on the form. A must-have for Cramps and Meteors fans, and all psychobilly devotees.