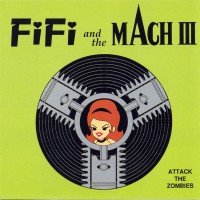 Cult Japanese power-pop/punk band Fifi and the Mach III was initiated in the early 1980s in the southern port town of Kitakyushu by childhood sweethearts Fifi and Nolly, Ramones fans that loved The Stooges and The Pistols. When guitarist Tsukasa joined, Fifi dropped out to raise a baby, but re-joined in 1989, leading to their signing to garage rock label 1+2 Records. The acclaimed debut CD, 'Attack The Zombies' here issued on vinyl for the first time-had a couple of Pistols covers and a cut of The Kinks' "I Need You," as well as unique originals like "Dog Of The Trend" and "Raw Power Queen," which hinted at their influences, yet yielded a distinctive sound.

Infa-riot
Still Out Of Order