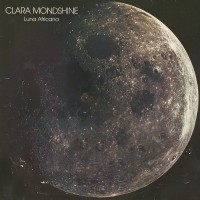 In the early 1970s, the journalist and composer Walter Bachauer played with experimental fusion group Between, and after founding the Meta Music Festival, began working for RIAS Berlin. 1981's Luna Africana was the first electronic album he issued as Clara Mondshine, produced by early Tangerine Dreamer, Klaus Schulze, it's delightfully lo-fi analogue with a very Berlin feel, the 'motorik' style most evident on tracks like andung Bei Vollmond (Landing On The Moon),' while 'Raga Des Aufgehenden Planeten (Raga Of The Rising Planet)' and mazonenharfe (Harp Of The Amazons)' add world music elements to the skeletal electronics. Fans of Kraftwerk, Cluster and the Eno&Harmonia collaborations need to get stuck into this obscure gem, a killer piece of Krautrock's emerging electronic puzzle.

First Hate
A Prayer For The Unemployed