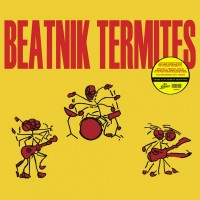 Cleveland power-pop punk trio Beatnik Termites was another group of Ramones fanatics that merged a heavy Ramones influence with a love of surf rock, their caustic pop melodies andironic, stinging lyrics turning the soft underbelly of pop music on its head, yielding a sound that had tinges of innocence, beneath a knowing, thrash-rock wink. Front man Pat Kim (AKA Pat Termite) started the band back in 1987 with drummer Reggie Silvestri and bassist Brian McCafferty, the group was reputedly a favourite of Nirvana's Kurt Cobain according to his diaries. This is a limited reissue of their hyper rare debut 6 tracks 12", whose original copies are impossibile to find for decent prices online. All Ramones maniacs now can fill that hole in their collectionthanks to the Hey Suburbia label.

Half Life
Never Give In