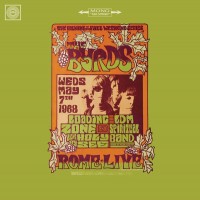 Released on vinyl are rare radio broadcast live recordings of The Byrds, performing in Rome in 1968. Founder Roger McGuinn and newbie Gram Parsons both sang lead and the result was a fascinating set of Cosmic American Music. Two Dylan-covers, also recorded live in '68, are added as a bonus.