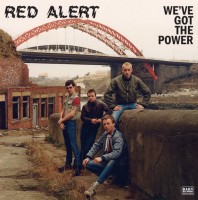 Reissue of the debut album by Red Alert, a true UK streetpunk classic originally released by No Future Records in 1983.The cover is slightly different from the first edition and the inner sheet contains other previously unpublished photos, all taken in the same photoshoot that were used for the original design.

Zentralheizung Of Death
Would You Rather?

Gino And The Goons
Check This Out