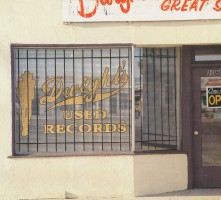 Perma-hatted country pioneer Dwight Yoakam is getting some of his mid-2000s records remastered for vinyl, one of which is 2004-s 'Dwight's Used Records'. The title sort of explains this one, seeing as how 'Dwight's Used Records' contains tracks that Yoakam released on compilations or on other artists' albums. Remarkably, the set stands up as a coherent release, one that showcases the rootsy sound that is at the heart of all Yoakam does.