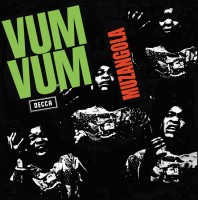 In Angola, in one way or another, Vum Vum is normally considered to be the father figure of the Angolan rock scene.There has been a fair amount of tributes paid to the overwhelming uniqueness of 'Muzangola', his first EP, published in 1969 by Valentim de Carvalho. However, despite its release in Portugal, the record never saw wide distribution in its main'metropolis'. Most copies traveled with the Portuguese diaspora, and the record became a cult holy grail highly sought by record collectors in Europe. It's raw. It's emotional. It's heavy. It's short. This EP, of just four tracks, is full of emotion. Just listen to the crying shattering scream on Monami, and you will understand what we mean. This Groovie Records reissue is not only much welcomed, but, in this sense, brings due recognition for this masterpiece by the Angola Screamin' Jay Hawkins!