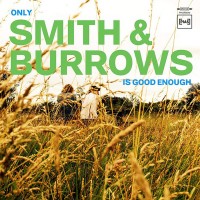 Nearly a decade has passed since Editors' Tom Smith and erstwhile Razorlight creative engine Andy Burrows released their first collaborative album 'Funny Looking Angels' in 2011 as Smith & Burrows. Its follow/up, 'Only Smith & Burrows Is Good Enough', was recorded in Nashville with the esteemed Jacquire King, and takes inspiration from Burrows' plentiful soundtrack work in the intervening years.

Butterfly Bangs
On The Street