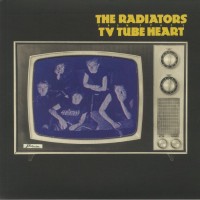 * LIMITED EDITION OF JUST 500 COPIES.* 10'' VINYL EDITION WITH A SPECIAL DIE-CUT TV SLEEVE.The album was a full-on assault on all that any self-respecting youth would find wrong about the world at the time. All band members contributed to the songs, but it was Philip Chevron's acerbic, angry, pointed and literary lyrics that gave the band such an edge. Philip strutted a gritty lead guitar counterpointing Pete Holidai's underpinning rhythm, with Mark Megaray's flowing bass lines belying the instrument's more usual role to sit in with drummer Jimmy Crashe'.s taut, driving rhythm. Steve Rapid fronted the band on some tracks, but Pete and Philip carried most of the lead vocals. Steve left before the record came out - he became a successful graphic designer and has re-imagined the sleeve for this 10-inch issue. He also designed the original