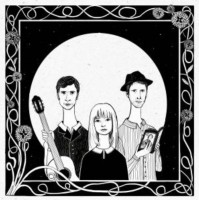 After that precious Christmas collaboration in 2019, the combination of Lia Pamina's delicious voice and Charlie Mysterio's and Roger Arias'(OS PEREGRINOS) elegance and inspiration is back, to give us thissmall, exquisite gem. This limited-edition vinyl Single is inspired by the work of the Galician poet and novelist Rosalía de Castro, where once again folk sounds, Brazilian music, and infinitely exquisite arrangements come together. The singer from Castellón lifts the Galician writer's words to the heavens, and the result is, yet again, a dream for even the most hard-hearted music lovers."Follas Novas" could be used to define what beauty is. Itis so simple it's disarming. Delicate arpeggios, dream-like harmonies, a pristine chorus that perfectly crowns the whole song's meaning. Which is nothing other than the beautiful idiosyncrasy of living. It is a lucid and magisterial demonstration that when poetry and music come together hand in hand, their association can be as powerful as that of image and sound. But the triumvirate reaches even higher levels with the animated video by Raquel Calvo, who once again makes a statement in sensitivity, esthetic fantasy and creativity. The perfect images for "Follas Novas". It is impossible to escape the excitement."Por Qué?" lets itself be seduced by Brazilian rhythms, and clearly the Galician language's proximity to Portuguese works like magic and takes us right to the other side of the ocean. We could invoke Gal Costa or Elis Regina, with those string arrangements, the chorus, the instrumentation. Exuberant tropicalism. We are talking about OS PEREGRINOS. In their hands, anything is possible."Lúa Descolo rida" goes back to getting drunk on bossa nova, raising its voice to a moon full of saudade, and also has the stellar collaboration of none other than Ken Stringfellow (THE POSIES, REM). When Román Verdeal comes in on the guitar, Víctor Gacio on the bass, and Ken's groove on the keyboards, the song opens wonderfully toward its delicious finale. The single wraps things up with "Paz Desexada" that begins with the exotic trumpet of Lucas Rousse and is yet another marvelous exercise in bossa. The warmth and sweetness of the music contrasts with the tragic, metaphysical, beautifully sad lyrics. Like the best Vinicius de Moraes songs. We could, if you want to take that leap though time and space, draw parallels between how the poet from Rio reached the heavens along with his loyal Toquinho and excellent singers like Maria Creuza or Maria Bethânia, and the magic of that alliance that brings the Mediterranean and the Atlantic together.It is a marvelous release, bathing that universal poet Rosalía de Castro in silk, showing how modern, relevant and malleable her words are.TRACKLIST01 Follas Novas02 Por Que?03 Lúa Descolorida04 Paz Desexada