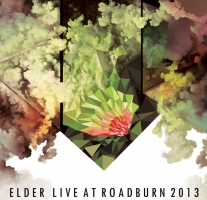 'Live at Roadburn 2013' by Elder is a recorded document of the Boston stoner band's debut performance at the Dutch rock festival. 'Live at Roadburn 2013' sees Elder run through tracks from their 2008 self-titled debut LP and its 2011 follow-up 'Dead Roots Stirring'. It also features both songs from their 2012 'Spires Burn/Release' EP. This sensational show was so hotly anticipated that the queue snaked out of the door and down the alley.

Mission Of Burma
The Sound The Speed The Light