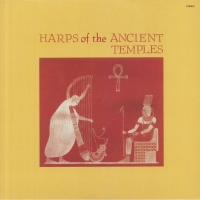 Gail Laughton, born Denzil Gail Laughton (1921-1985), was an American jazz harpist. He worked in Hollywood, playing on many film and cartoon soundtracks. Originally released in 1969 on the small imprint Rapture the record has been produced by famous sound engineer Paul Beaver (Beaver & Krause, Lalo Schifrin & Orchestra) the man who introduced the moog to Stevie Wonder and Frank Zappa. Standing on the verge of both modern classical and space age, the record featured the track 'Pompeii 76 A.D.' as heard on the movie Blade Runner. Gail Laughton can easily be considered a forerunner of new age, as documented on the highly influential compilation 'I Am The Center, Private Issue New Age Music In America, 1950-1990' assembled by project manager Patrick McCarthy for Seattle based Light In The Attic. 'The shimmering, ethereal quality of the harp sings out under his loving care'.