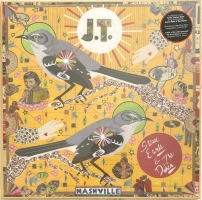 Alternative country music veteran Steve Earle poignantly pays tribute to his son here, the late Justin Townes Earle who passed away in August 2020 at the age of just 38. 'J.T' sees Earle and his backing band The Dukes cover ten tracks from his son's back catalogue, plus an original he penned himself shortly after Justin's death.

Maureens, The
Something In The Air