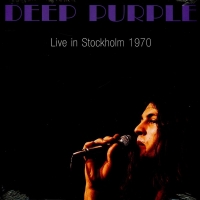 The album was originally recorded by Swedish National Radio for a radio show called Tonkraft at the Stockholm Konserthuset on 12 November 1970, but not released until 1988. The tapes were re-mixed by Tom Leader at Angel Recording Studios in London. It remains the prime example of the early Mk II set list. The set list comprises songs from the album Deep Purple in Rock and long instrumentals from earlier albums. The two songs "Mandrake Root" and "Wring that Neck" took up half the concert in the early days, until the Fireball tour when the lineup was able to add more original material.TracklistSide ASpeed King Into The Fire Paint It BlackSide BWring That NeckSide CMandrake RootsSide DChild In Time Black Night