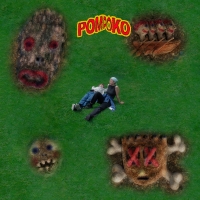 Named after the enjoyably bizarre Studio Ghibli anime about shape-shifting raccoons, Norwegian punk-pop outfit Pom Poko reveal their second studio album 'Cheater'. Coming out less than two years after their eclectic debut 'Birthday', 'Cheater' retains the rawness of its predecessor but expands its pool of influences and inspirations - Devo and Deerhoof to name but two.

Fort Not
The Club Is Open