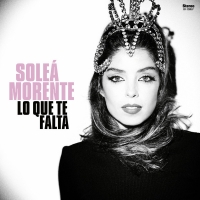 This is a major event for Elefant Records, and at the same time it is a release that somehow manages to close a circle that almost nobody knew was open. The magic of music. The thing is, the new album from Soleá Morente, produced by David Rodríguez, follows that rule about third albums: third albums are for reaffirmation, maturity, development. And, for the first time, Soleá herself has taken the lead role on songwriting for some of the songs on the album, which lets off exotic, rooted aromas but with an absolutely exceptional and marvelous sense of pop. Because Soleá Morente is a unique character on the Spanish music scene. Yes, because she is the daughter of the legendary flamenco singer, Enrique Morente and the dancer Aurora Carbonell, but also because the middle Morente child has always been permeable to other musical references and styles. That is why, on this album, credit is also given to songwriters like Ana Fernández-Villaverde (LA BIEN QUERIDA), David Rodríguez (LA ESTRELLA DE DAVID) and J (LOS PLANETAS). It is an exquisite cocktail: a square circle.TRACKLIST01. Cariño 02. No Puedo Dormir 03. Viniste A Por Mí 04. Lo Que Te Falta 05. Ducati 06. Pero Es De Noche07. Cosas Buenas 08. Mundo Nuevo 09. Coca-Cola 10. Tutti Frutti 11. Olvidarme De Ti 12. Condiciones De Luna

Modern Studies
The Weight Of The Sun