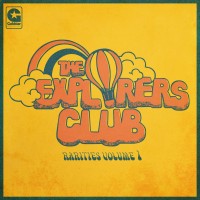 The Explorers Club are a sunshine pop band based in Nashville. They authentically recreate the sounds of The Beach Boys, The Byrds, The Monkees and The Beatles. 'Rarities Volume 1' sees eleven tracks plundered from the band's vaults. It includes the much sought after 'Suites EP', cover versions, rare singles and outtakes from their 2012 album 'Grand Hotel'.

Explorers Club
To Sing And Be Born Again