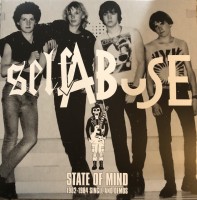 An essential collection from UK Punk Rockers 'Self Abuse' from Bournemouth, Dorset. These delinquents formed in 1982 while still teenagers, played out and released the fantastic 'State of Mind' demo. 1983 found them releasing the 'Teenage Demo' and playing loads of gigs with the likes of Subhumans, A-Heads, Cult Maniax, Screaming Dead, Cult Maniax, Butcher, Amebix, Admass, Organised Chaos, Madmass, Last Orders, Confession of Sin, Idiom Tribe, Shrapnel, The Samples, Screaming Dead, Shock to the System, Breakout, , Atrox, The Parasites, amongst others. Often described as a cross between Stiff Little Fingers and Chron Gen,we feel that may be a bit simplistic as they have their very own sound loaded with plenty of attitude and smarts.