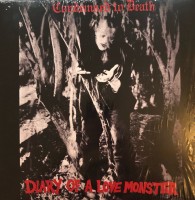 Condemned To Death
Diary Of A Love Monster

Condemned To Death/C2D Were a SF based band associated with the Vats, The Vats were an abandoned Hams Brewery in SF where Bay Area punks squatted and bands such as MDC,Sluglords and DRI among others rehearsed in the 80s.C2D was one of the best known bands that formed and rehearsed at the Vats.Puke n Vomit is releasing two LPs from the band. Condemned to Death Diary of a Love Monster' This will be the first official repress&reissue of their popular 1984 LP originally on Land Mine/ R Radical Records and features future members of Verbal Abuse.