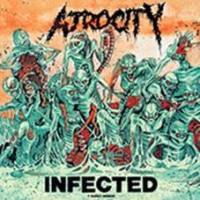 "Infected" by Connecticut's sonic butchers ATROCITY turns 30 and gets a special quality centered re-release, enriched by an extra LP featuring two early Demotapes (1986/1987) Includes an extended version of "Infected" adding a bonus alternate version of the song "Infected" that was only included on their "Hatred birth" EP and their two demos "Toxic death" (1987) and "Ravaged by disease" (1987). 32 SONGS of gut/mangling Death&Grind brutality! Housed in a gatefold jacket displaying rare photos and original artworks, also including an insert with zine excerpts and an interesting interview focused on the band's early years!