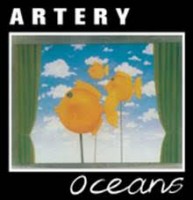 Formed in Sheffield in 1978 and originally known as just 'The', Artery is a band that saw several changes in the line-up throughout the '80s. Supported by John Peel and often compared to Joy Division their music incorporates various fundamental elements of the British post-punk aesthetic. Originally released in 1982 on Red Flame records, 'Oceans' was Artery's debut mini-LP including some absolute gems such as 'into the Garden' and 'Afterwards' infectious anthemic tracks of the post-punk era.

Shoenfelt, Phil
Under The Radar