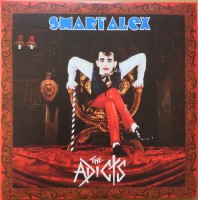 Smart Alex released in 1985 is just as great as their first two albums, this time out they took some chances and slowed things down at times, giving the album a cool ominous tone, creating a fantastic slice of darkness tinged punk with doses of pop and new wave without compromising anything that made them the great punk band that they had become.Just check out tracks like 'Balifornia' or'Jellybaby' to see how a band can progress and evolve without losing site of everything they were and could be.comes with a poster and liner notes from the band.

Violent Minds
We Are Nothing