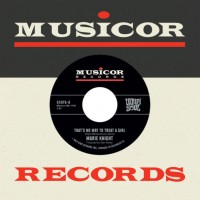 Marie Knight's legendary 45 from 1964 that made her a name in the Northern Soul scene. Massive spin in Wigan Casino allnighters, officially reissued here for the first time with 'Say It Again' on the flip, as originally released.TRACKLISTSide ATHAT'S NO WAY TO TREAT A GIRLSide BSAY IT AGAIN

Parrish, Dean / Porgy And The Monarchs
Bricks, Broken Bottles And Sticks / My Heart