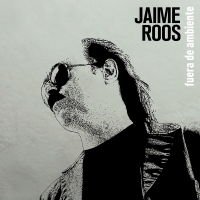 Fuera de Ambiente (2006), the latest album by Uruguayan musician and reference, Jaime Roos, now first time on vinyl! Includes a new cover artwork, designed especially for this edition, and a new audio master that far exceeds the original.Groove and introspection in the new millennium. With a unique mix of music roots and cosmopolitan sounds, Jaime Roos would become one of the most successful and influential artists of Uruguayan music.Released in 2006, Fuera de Ambiente is his last album of original material so far. Without leaving aside the groove of candombe fusion music, the eloquence of murga and his distinctive blend of Latin-American rhythms with pop and rock touches, this is one of his most introspective and sophisticated works. A timeless record that has gained recognition over the years as one of Roos' greatest albums. This is the first time ever that Fuera de Ambiente is released on vinyl.Andrés TorrónTRACKLISTSIDE AA1. Postales para MarioA2. Catalina A3. Por la Mirada A4. Por amor al arte A5. De la Canilla SIDE BB1. Sólo contigo B2. Te quería decir B3. Tema del Hombre soloB4. Esquela B5. Vida Número Dos