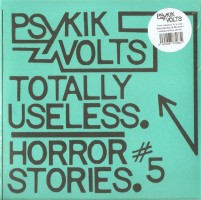 One of the lost DIY classics from '79 gets a deserved facsimile reissue. Psykik Volts were a group of 18-year-olds from West Yorkshire, UK who formed in 1978 influenced by The Clash, Sex Pistols, etc. The band broke up soon after this self-financed Peel favourite came out on the Ellie Jay label, but in that brief time they produced a rough and off the wall new wave gem.Side ATOTALLY USELESSSide BHORROR STORIES NO. 5

Agnew, Rikk
All By Myself