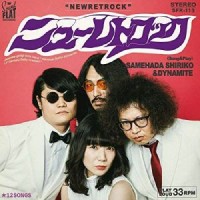 Samehada Shiriko & Dyamite are from Fukuoka, Japan and their third album 'Newretrock' is filled with powerful retro-rock which is refreshingly new at the same time. The LP was previously released as CD and contains 12 songs, including a cover version of 'Dangerous Saturday', originally performed by Japanese girl/group The Candies from the 1970's.

Ugly Beats
Bring On The Beats!