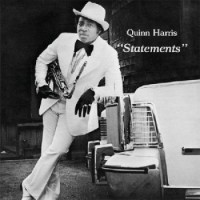 Quinn Harris' second album 'Statements' was recorded and self-released in 1975 with his eight-piece ensemble The Masterminds. Back then the album received little notice beyond the small jazz community in the Los Angeles area. This is the first official reissue of Quinn Harris' funky soul-jazz classic album. -Statements- features songs made popular by Al Green, Roberta Flack and Minnie Riperton, as well as two originals penned by Harris himself. Available as a 180 gram vinyl edition complete with the original 1975 artwork.