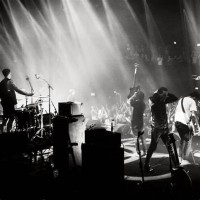 Deafheaven have been expanding what metal can be since 2010. The San Franciscan post-metal band were about to go on tour for their ten year anniversary but were unable to do so. Instead, they went into the studio with producer Jack Shirley and recorded '10 Years Gone' a live session featuring the songs they would have taken on the road. It includes an absolutely blistering version of their earliest song 'Deadalus' along with powerful versions of classics such as 'Vertigo' and 'Dream House'.