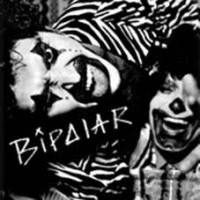 Bipolar is the twisted creation of Pouya and Obash, formed in a Brooklyn pisshouse while on a bender in the not too distant past. The duo moved to the USA from "conservative" Tehran, Iran as a cog in a wheel of a true underground scene in pursuit of their passion for cross dressing musical performance based on their love of the circus and all things theatrical. Think SCREAMERS finger-banging THE DICKIES while THE SPITS egg them on - Pouya has already done time on keys with The Spits.