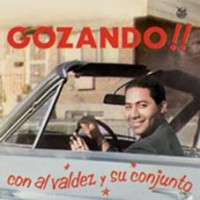 One of the 'Holy grails' of 1960s Cuban music was not recorded, produced or released in Havana or New York; in fact it was made in Lima, Peru.Perhaps due to the fact that it was recorded in South America, Gozando!! has more than simply Cuban and Nuyorican genres like pachanga, mambo, descarga, guaracha, and bolero; there is also a fantastic cover of the Colombian cumbia classic 'Tabaquera'.Overall, this swinging MAG sessions sound like a long lost record by Cachao and Tito Puente if they led an orchestra with Charlie Palmieri on piano and Tito Rodríguez on vocals.Always an extremely rare collector's item, Gozando!! will now be able to reach a wider vinyl-loving audience with this first-time ever faithfully reproduced reissue.TRACKLISTSide A1. GOZALO2. APRIETA3. SI ME PUDIERAS QUERER4. GUAJIRA5. EL COLUMPIO6. TABAQUERASide B1. EL JALEO2. QUÉ RICO SABOR3. CORAZON EN CRISTAL4. PACHANGA SE BAILA ASI5. DAME TU CARIÑO6. PACHANGA CON GUAGUANCO