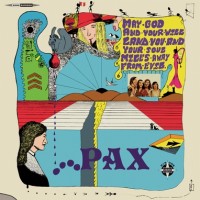 Pax is the forerunner of hard-rock in Latin America. The group was led by Pico Ego-Aguirre, former member of Los Shain's, iconic '60s garage band from Peru. Three young Peruvians and a North American, all under the age of 23, put together an album with lyrics in English, vigorous guitar solos, double bass drum set and a record sleeve suffused with symbology. It was released in 1972 and is considered foundational and was recorded under the influence of bands like Black Sabbath, Led Zeppelin or Deep Purple. Reissued here in its original gatefold-artwork, includes an insert with extensive liner notes.TRACKLISTSide AA1. A STORYLESS JUNKIEA2. ROCK AN' BALLA3. GREEN PAPER (TOILET)A4. SITTIN' ON MY HEADSide BB1. DEEP DEATHB2. FOR CECILIAB3. PIG PEN BOOGIEB4. SHAKE YOUR ASS