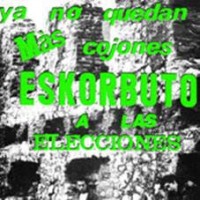 RE-PRESS!!! Black vinyl.First-ever legal reissue of this 1986 cassette by Eskorbuto, one of the most influential punk bands in the Spanish and Latin American scenes. Its original release was part of their campaign to enter the Spanish general elections as a political party. They didn't achieve it but the songs here told more truths that any political speech.These six tracks offer what they are known for: radicalism, a self-taught style and crude lyrics. Another blow of their anti-everything stand.TRACKLISTSIDE A1. YA NO QUEDAN MAS COJONES, ESKORBUTO A LAS ELECCIONES2. ESCUPE LA B.3. CUANDO LOS DINOSAURIOS DOMINABAN LA TIERRASIDE B1. LA SANGRE, LOS POLVOS, LOS MUERTOS2. MALDITO PAIS3. ABAJO LA LEY