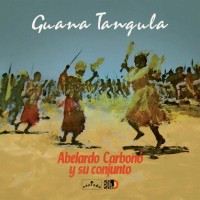 Carbonó's early work was different from his contemporaries. It was definitely not salsa, nor was it really cumbia. Rather, it was novel and genius polyglot stew of diverse musical strains with African roots but never before blended in this way. Styles like afrobeat, soukous and highlife were effortlessly stirred together with elements of the Cuban son, touches of Latin rock and funk, with a pinch of calypso, a hint of Haitian compas and even a dash of rock and roll, not to mention a foundation of local coastal Colombian varieties like vallenato and porroThis 1980 LP still sounds refreshingly unique and hip today, as if Abelardo Carbonó y su conjunto were the missing link between the 1950s pan-Caribbean acoustic guitar-led sounds of Bovea y sus Vallenatos and the more electronic and Africanized genres of champeta and terapia of more recent years. You can even hear slide guitar and psychedelic echo effects in the mix, which brings the recordings to a whole other level of the unexpected.Presented in its original artwork and pressed on 180g vinyl.TRACKLISTSide AA1. QUIERO A MI GENTEA2. LA CAMISA RAYAA3. A LAS SEISA4. LA AURORAA5. SILVIA MARIASide BB1. GOZA LA VIDAB2. GUANA TANGULAB3. POR TI VIVO TRISTEB4. MI MUCHACHITAB5. EL BRINCO DE LA PULGA