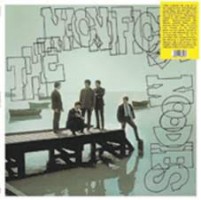 Although chiefly associated with art rock and progressive rock due to the symphonic bent of their breakthrough second album, Days Of Future Past, as the group name attests, The Moody Blues began as a rhythm and blues band, formed in Eridngton, a suburb of Birmingham, England in 1964, spinning off from local bands El Riot & The Rebels and the Krew Cats. Keyboardist Mike Pinder, flutist/percussionist Ray Thomas, guitarist Denny Laine, drummer Graeme Edge, and bassist Clint Warwickare the featured players on their debut disc, released by Decca in 1965 following the chart success of outstanding single, "Go Now," (a cover of an emotive r'N' b song by black American female singer, Bessie Banks) and unlike every subsequent release, this album has a heavy Mersey Beat rhythm and bluesinfluence, as well as an overarching blues-pop grounding. The first side is made up of covers, including a great cut of Chris Kenner's "Something You Got," while side two is mostly taken up with original numbers penned by Mike Pinder and Denny Laine< this edition has 6 bonus tracks. A crucial piece of the Moodies' archeology, The Magnificent Moodies captures the group at their very beginnings.

Blue Ash
No More, No Less