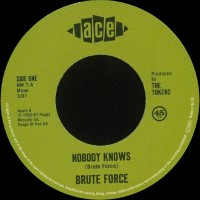 Brute Force is the pseudonym of Stephen Friedland, an American singer and songwriter. In 1964, while in New York City as a young adult, he met the producers Hugo and Luigi, who co-wrote the Elvis Presley hit 'Can't Help Falling In Love'. They introduced Friedland to the Tokens, known for their hit 'The Lion Sleeps Tonight'. Not only was Friedland hired as a songwriter for the Tokens' music publishing company, he also became the group's keyboardist.Side A is Brute Force's version of his song "Nobody Knows What's Going On My Mind But Me', better known as a hit for the Chiffons.In 1967, Friedland recorded as Brute Force with the album "I, Brute Force, Confections of Love", which was produced by John Simon, later renowned for his work with the Band. In late 1968, Brute Force recorded his song ing of Fuh' which is the story of a mythical king who ruled the kingdom of Fuh. The music and lyrics begin innocuously until they get to these lines, "I said the Fuh King-he went to wherever he wanted to go/Mighty mighty Fuh King/All hail the Fuh King."