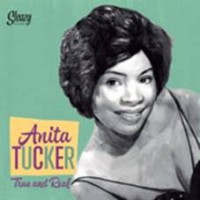 Anita Tucker was a blues and R&B singer, born in Arkansas. Her first release was in 1955 on the Philadelphia based Guyden label, an offshoot of Essex records and part of the recording family that would expand in later years to include some of the best originators of the Philly sound. Later she released a couple of singles for Capitol. After she met Gerard Akueson, a Togolese musician, record producer and founder of the Akue record label, Tucker released a couple of singles on that label in the 60s. This 18-track compilation contains blues, rhythm-n-blues and big band jazz from her active career.