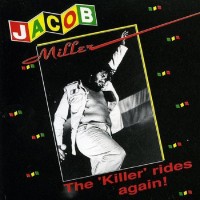 Re-introduction of mid-70ies recordings for Jacob Miller on vinyl produced by Tommy Cowan with the Inner Circle Band around brothers Roger and Ian Lewis aka Fatman Riddim Section! A supreme live performer, Jacob Miller had a stormy temperament which gave him an indescribable aura and earned him the name "Killer". He was one of the most brilliant singers of his generation and died in a car accident in 1980 at the age of 25. Tommy Cowan is a former member of the Treasure Isle vocal group The Jamaicans, who further displayed his credentials as a rootsy producer for Israel Vibration, Ras Michael, Toots & The Maytals and John Holt.