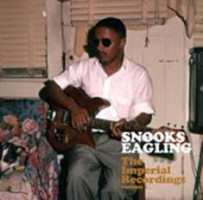 Produced by the great New Orleans producer Dave Bartholomew, these early 60's recordings for the Imperial label are a perfect showcase for the eclectic blues guitarist and singer known as Snook Eaglin. Snook's ability to play a wide range of songs in different styles and make them his own, earned him the nickname 'The Human Jukebox'. This is a superb introduction to his music. Some sort of hot Creole recipe based on many different ingredients (blues, rock'n'roll, country, Latin(plus a hint of Ray Charles) all mixed up into a deep R&B soup.

Lightnin' Hopkins
Walkin' This Road By Myself