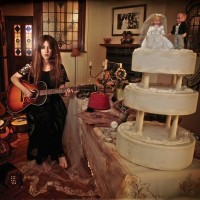 Welsh guitarist Gwenifer Raymond's second album, 'Strange Lights Over Garth Mountain', has adopted more of the artist's 'Welshness', while her first first album was reminiscent of John Fahey's American Primitive guitar style, she is calling this one Welsh Primitive Guitar. It was all recorded under lockdown in her flat in Brighton - but she says this did not inform the songs, merely the conditions in which she recorded it.